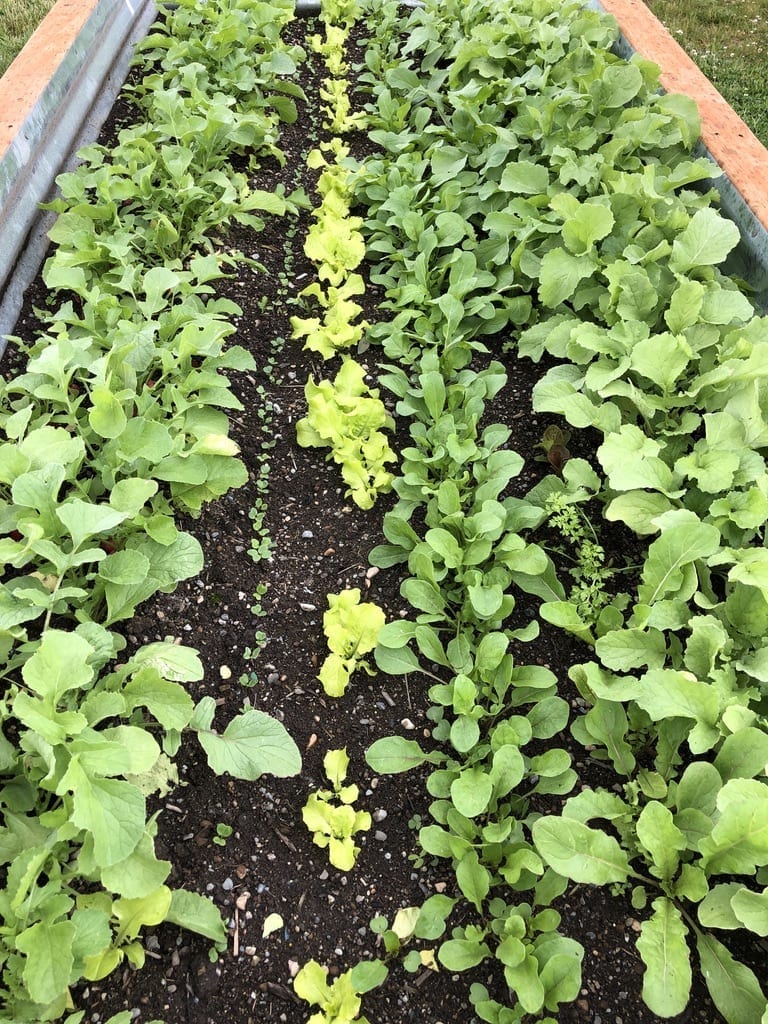 I love radishes! I could eat them like someone else eats candy. Radishes are found at the store all year round, but you’ll find that they are so easy to grow. You just have to know how to grow them the right way. I’ll show you here.

Radishes are one of the easiest vegetables to grow. You can harvest them from the garden as soon as three weeks after you plant them!

History Of The Radish

Let’s talk about where radishes come from. They’ve been around a very long time.

Radishes originated in China, Greece, and Egypt before the Roman times. Oriental nations cultivated long white radishes. Round varieties were developed by the Dutch and French.

Radishes are grown around the world and used in most cuisines. Hybrids of both round and elongated radishes are available today.

They are eaten with butter as a breakfast food, a spicy raw snack, an addition to salads, pickled, roasted, and topping tacos.

You can use radishes wherever you think sounds good.

What Is A Radish?

Radishes are a group of hardy root vegetables.

They can be planted several times during a growing season so you can have a continuous harvest. You’ll plant them in early spring and fall, but not during the hottest summer months.

Radishes do not do well in the heat. They will “bolt” in hot weather and become tough and inedible. Bolting just means that the plants quit growing and start forming seeds.

You don’t want that in a radish! So, plant radishes in spring and fall cooler weather.

Radishes are delicious, and they’re also good for you.

They’re low in calories and carbs and have no fat. Radishes are packed with vitamins E, A, C, B6, and K. They’re also high in antioxidants, fiber, and minerals. In fact, just 1/2 cup of radishes a day will provide 15% of one’s vitamin C needs.

How Do You Plant Radishes?

You start with radish seeds.

Radish seeds are available in two configurations: loose in a seed packet and enclosed in a seed tape. You can see all kinds of radish seeds at Amazon here.

It’s best to plant radish seeds directly into the garden. This will ensure that you don’t disturb the roots when trying to transplant starts.

Sow your seeds directly into the ground 4 – 6 weeks before the last expected spring frost. You can find your last frost date here at The Old Farmer’s Almanac.

I’m using seed tape to sow a new row of radishes here. The tape has the seeds perfectly spaced from each other which minimizes the need for thinning the seedlings later.

For continuous harvest, plant seeds every week up until early summer. Start planting again about two months before your expected first fall frost. You can find your fall frost date here.

Winter radishes include daikon, Chinese, and Korean. These larger varieties can continue to grow in the soil all winter as long as there is no hard freeze.

Radishes want sun! Choose a location for your radishes that has full sun. Any shade will make the radishes focus on their leaves, not the roots.

The soil should be rich in organic matter. If compacted or clay, add sand to increase drainage. If not rich, add fertilizer or compost.

Rotation is a must for radishes. They will not grow well if planted in the same area every year. So, plan on planting radishes in the same location only once every three years.

Plant in the spring before your last spring frost. Then plan on planting again in the fall before your first fall frost.

I have planted new seeds every two weeks. You can see the new seedlings coming up next to radishes that are almost ready to harvest in the photo above.

Crowded radishes do not do well.

Thin the radishes when they are about one week old. This will allow the remaining ones to grow. Be sure to eat the seedlings in a salad or stirfry.

They’ll be ready as early as three weeks after you planted the seeds, depending on the variety.

The roots should be about one inch in diameter at the soil surface. Pull one out to check and even taste test.

Do not leave in the soil long after they mature as they don’t hold well and will deteriorate rapidly.

Cut the green tops and thin tails off and wash them thoroughly. Store them in the refrigerator in a plastic bag.

Store the radish greens separately. They are delicious too and can be added to salads or sauteed.

Radishes are used in many of the world’s cuisines. Pickled in Japan, topping tacos in Mexico, buttered for breakfast in France, eaten as raw delight snacks at my house.

Here are some more ideas for you to use radishes in recipes:

I was surprised about how many varieties of radishes there are out there!

Round ones, elongated ones, red, white, pink, black, and purple ones.

Here are some of the favorites that I plant in my garden. I think you’ll love them as much as I do.

Scarlet Globe is the radish you see at the store. It is a round red radish with white flesh, sweet and peppery flavor. The globe radish can remain longer in the ground after spring than other varieties. The scarlet globe has been around for awhile! It’s been growing in the US since the late 19th century.

Cherry Belle is perfectly round, has bright red skin with crisp and tender white flesh. It’s one of the earliest spring radishes and available at Amazon.

Daikon Radishes are large white radishes used in Japanese cuisine. Daikon radishes account for the highest percentage of cultivated vegetables grown in Japan. You can grow this as a winter radish too. These are organic and non-GMO.

French Breakfast is an elongated radish, bright red in color with a pure white tip. Good for growing in summer’s hotter weather, it will stay tender. It grows to 2 – 4″ long. They are available at Amazon.

Sparkler Radish is an heirloom radish from the Dutch and French tradition of tender, round spring radishes. This heirloom one is red with a white tip.

Champion Radish is bright red and round. Developed by the German and French, champion radishes won the AAS award in 1957. I love these radishes! You can find them at Amazon.

Watermelon Radish is a form of Daikon radish that originated in north China near Beijing. It is striking with beautiful red flesh under white skin. It’s often served sweetened as a dessert or fruit in Japanese cuisine. These beautiful ones are available from Amazon.

White Icicle is a long white radish. This radish has been grown in the US since the late 19th century. The icicle is like its namesake: a very early, pure white, long radish. Here’s an organic choice from Amazon.

If you want to plant something different, consider these unique radishes.

Black Spanish Round Radish is actually a winter squash. One of the most ancient varieties of radish, this radish is traceable to early Europe. It would have been grown in colonial gardens. It has dark black skin with firm white flesh and is known for its sharp flavor. These heirloom black radish seeds are at Amazon.

Lady Slipper is a French heirloom radish. It’s bright pink and elongated. It is crisp, sweet, with a mild pepper flavor. This radish holds longer than other varieties. These lady slipper radishes are available at Amazon with free shipping.

Purple Plum is a French heirloom radish with a striking purple color. It was first offered in the US in 1985. These purple plum radishes are available at Amazon with free shipping.

German Giants are large round, bright red radishes. As its name implies, it’s an Amish heirloom that originated in Germany. Here’s a link to German Giants with free shipping.

Japanese Minowase is an ancient heirloom daikon radish from Japan. This is one of just five strains of radish from which all of the Japanese radish hybrids were developed. Radishes are very important to Japanese cuisine, especially as a side of pickled radishes. I found some with free shipping from Amazon for you.

How To Grow Radishes The Right Way

Ok, so there you have it! Radishes are one of the easiest veggies to grow yourself in your garden or container.

You can harvest delicious radishes from earliest spring through winter, with the exception of a few of the hottest summer months.

You can eat them raw or use them in delicious recipes.

What are you waiting for? Let’s start planting some radish seeds!

Here’s another post if you want to read more about how to start seeds for your vegetable garden.

We’ll send out tips, tricks, and how-to’s for the garden.

Windy Gardens is a participant in the Amazon Services LLC Associates Program, an affiliate advertising program designed to provide a means for sites to earn advertising fees by advertising and linking to Amazon.com.

The money I make from affiliate marketing costs you nothing but keeps me online, so thank you for your continued support!